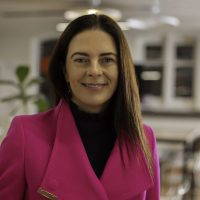 Professor Bronwyn Fox has been instrumental in positioning Swinburne at the forefront of manufacturing, building extensively on Swinburne’s Industry 4.0 initiatives and capabilities.

She has led a number of significant initiatives and research partnerships through her role as the founding Director of Swinburne’s Manufacturing Futures Research Institute, including:

She has demonstrated a sustained commitment to support the growth of the carbon fibre and composite industry in Australia through targeted research and was previously a co-founder of the Carbon Nexus facility at Deakin University, a core part of a $100 million dollar precinct in Geelong. Professor Fox is the Chair of the Australian Academy of Technology and Engineering (ATSE) Victorian Division.

She is a Fellow of the Academy of Technology and Engineering, a Fellow of the Royal Australian Chemical Institute and a Graduate of the Australian Institute of Company Directors. In 2018 Professor Fox was awarded the GCMM Research Leadership Award at the 14th Global Congress on Manufacturing and Management.